As promised last month, we continue into the next Article:

Article XIII: Of the Use of the Sacraments.

1] Of the Use of the Sacraments they teach that the Sacraments were ordained, not only to be marks of profession among men, but rather to be signs and testimonies of the will of God 2] toward us, instituted to awaken and confirm faith in those who use them. Wherefore we must so use the Sacraments that faith be added to believe the promises which are offered and set forth through the Sacraments.

3] They therefore condemn those who teach that the Sacraments justify by the outward act, and who do not teach that, in the use of the Sacraments, faith which believes that sins are forgiven, is required.

The Sacraments, especially Baptism and the Lord’s Supper, may be for us Lutherans the chief defining part of our identity – not primarily as Lutherans, but as Christians who seek to follow our Lord Jesus and to honor His Word, His instruction, and a Scriptural understanding of the mystery of His nature. The details of how we understand both the Sacrament of the Eucharist and the person of Christ were hammered out in much controversy over the half-century that followed the Augsburg Confession. These teachings are given full treatment in the Formula of Concord (FC Ep and SD Articles VII, VIII). Perhaps we can explore these as a Bible Study separately sometime in 2021. Assuming the pandemic abates.

As we look at this article, we will touch briefly on some of the controversies that swirled around at the time of the Augsburg Confession; controversies that continue to be with us today. Consequently, our understanding of the Sacraments is briefly summarized here in a “broad brush.”

There was some serious monkey-business that preceded the June 1530 Imperial Meeting (Diet) at Augsburg. Nine years earlier at the Diet of Worms, Prince Charles V had heard Luther refuse to recant his writings with the famous words “I cannot and will not recant. I cannot do otherwise. Here I stand. God help me. Amen.” Over the ensuing years, the controversy did not abate. Now there were Turks (Muslims) from the Ottoman Empire invading Europe – they reached the gates of Vienna, Austria. (If you have the book I recommended, a fuller overview is on pgs. 21-22.) In addition, the reformation had taken on some new baggage in the form of Ulrich Zwingli of Zurich and John Calvin of Geneva as well as other more radical opponents of the Roman Catholic Church.

The Lutheran reformers initially looked to correct rather than to break with the historic church catholic. (“Catholic” meaning “universal.”) In 1529 the Schwabach and Marburg Articles were prepared in efforts to find common ground with other reformation movements. Unfortunately, there were doctrinal differences that could not be resolved – primarily with respect to the Sacraments. So there are two kinds of statements here. One speaks against the radical reformers (including Ulrich Zwingli) and the other against the position that had been taken by the Roman Church.

From the perspective of those who follow after Zwingli, the sacraments are statements of my personal profession of faith and identity – and essentially nothing more. They show what I do and the dedication that I have generated from inside me. From the Lutheran perspective, the sacraments demonstrate my faith and identity as a consequence of what God does; they are first and foremost “signs and testimonies of God’s will toward us” – thus reversing the direction of the movement. As God comes to us by means of His Word and the Sacraments, we are changed; faith is brought forth, and we then become His own, and so  become signs to the world around us of the faith that is granted by His power.

From the Roman Catholic perspective, the sacraments are also of a different nature, but miss much of the richness of God’s intent – i.e., that faith would be present. There is a Latin phrase that is used to express the process – ex opere operato – which generally translates “from the working of the work.” In this, grace is “infused” into a person much like a substance, by the fact of the person being present and observing, even apart from faith.

And therein lies the problem. Our salvation then is the result of something that we do, apart from our attitude with respect to the sacrament. Granted, the faith that we show forth is given to us by the Holy Spirit working through the Word to break the stones that are our sinful hearts. (Jeremiah 23:29) God desires that our attitude be one of dependence on Him and Him alone for all things and that we acknowledge Him as the giver of all good things.

So you can see that the problems that Lutherans have with both Rome and the “Protestant” version of Christianity are similar. Both look at what we as humans do rather than focusing exclusively on what God through Christ has already done for us, and so Christ’s glory is obscured by human work. They just approach the work that we do from slightly different angles. 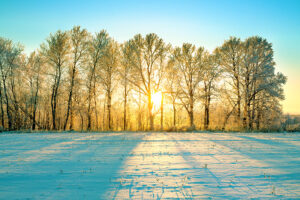 I Wish It Could Be Christmas All Year Long

January comes as a wonder for me every year. Yes,[...]