Synod Assemblies are always interesting events! This year Dusty and Joni Booth served us all as voting members of the assembly representing Christ/Upper Fall River to the Central States Synod. This month’s offering gives you a brief low-down. If you’d like to take the time to go through the business addressed at the Assembly, you can find the whole notebook given to the participants at www.css-elca.org/assembly.

The big topic at the Assembly was the election of a new Bishop to serve a six-year term at the helm. The process is somewhat complex, with opportunity on the first ballot to nominate virtually anyone in the country who is on the ELCA Word and Sacrament roster. The nominating committee put forth a ballot comprising six pastors – including one currently serving in Louisiana. At the end of the first ballot there were between 40 and 50 nominees from all over the states. After five ballots (the expected and the maximum allowed by the process), Rev. Susan Candea was elected to serve for the next term.

One of the interesting components of the process is that for each ballot, the participants are broken down into percentages of men, women, People of Color, youth. The percentages remained (no surprise) consistent throughout the process.

The opening evening worship encouraged the church to “return to God and the dream He had in mind when He created us instead of the nightmare we have made of it.

Bethany College continues to operate well. The 2019 incoming Freshman class was the largest in the history of the college. Statistics for the incoming students, however, showed that the largest percentage consider themselves “Nones” – i.e., having no affiliation with any organized religion; perhaps “spiritual but not religious.” What that means for the future of a Lutheran institution of higher learning is something to think about.

The Bishop Election was conducted by Bill Horne, Chair of the ELCA Church Council. He reported on the churchwide goals of the ELCA: to strengthen lay leadership, and to develop congregational vitality. Specific promotions included:

One resolution – SA 19.05 – generated significant discussion. Its purpose (in part) is to memorialize the 2019 ELCA Churchwide Assembly to “clearly and explicitly (renounce) sexism and sexual misconduct in all its forms and its continued impact on the church and the communities that we serve. Further (to) repent of all the ways in which we have been complicit, either explicitly or implicitly, in acts of sexism and sexual misconduct.” The full text is available at the CSS-ELCA website.

Several amendments were proposed and discussed. The final approved version of SA 19.05 is also available at the CSS-ELCA website.

The Synod’s approved budget for 2020 is $1,706,951, which is close to last year’s revised budget of $1,700,222. In 2018 the Synod experienced a 3.7% decrease in congregational support from the previous year. Savings were realized by sharing office space in Kansas City, MO with the local Episcopal Diocese. The increase in clergy compensation guidelines for 2020 reflects the average inflation rate for 2018 of 2.4%,

General Statistics – in the past year there were 5 new people in the Synod; two seminarians are assigned to the Synod; six transferred out of the Synod; nine retired pastors died; five are on leave from call; twenty resigned their calls; three resigned from the roster; and ten retired.

The program featured Dr. Rich Melheim, author of several books and creator of Faith Inkubators/Faith Five. More on these next month as there is time to explore the details further. 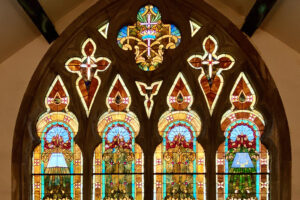 A House of Prayer

Article XII – Of Repentance – (Our churches) teach that[...]